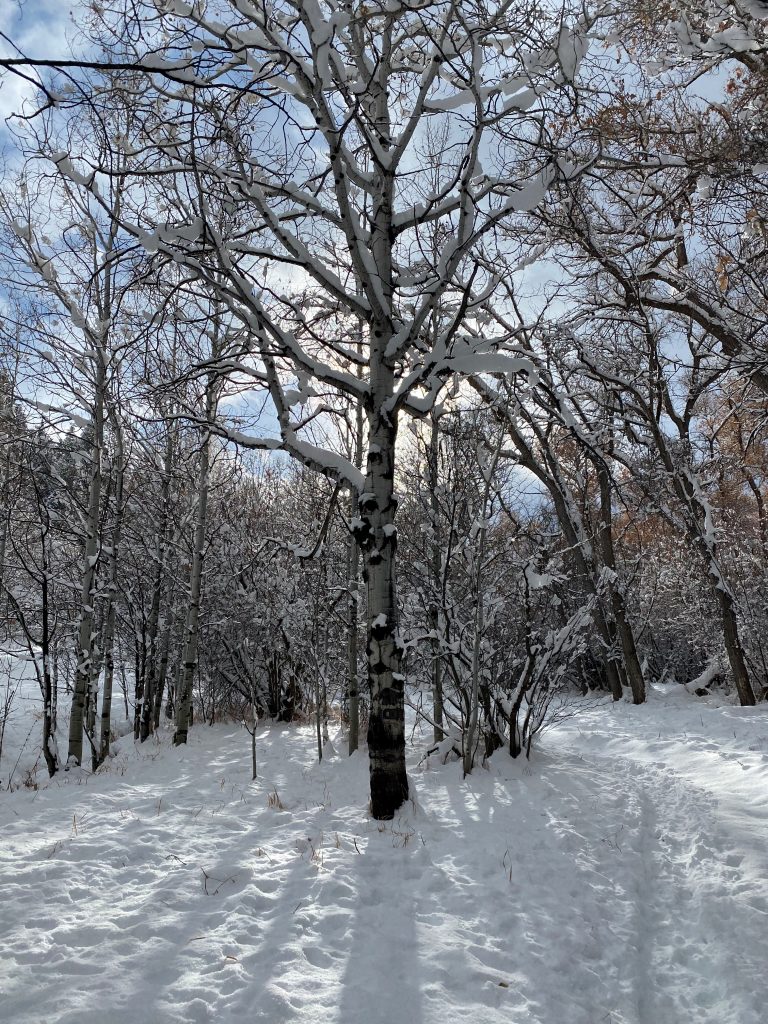 I skied yesterday. Earliest day I can remember free-heeling in the back country. November 9th.

We hiked it very early that morning—7:00 a.m.—myself and two of my sons. I eyed the snow depth every half mile or so, and tracked six inches at the trailhead, eight at what we call the Big Meadow.

I contemplated the entire way how well this could be skied. A first snow like this usually sets the base, and it’s the second snow that begins to be ski-able. We followed old steps from the day before for the first half mile, kicking steps into the new snow that had fallen since whoever had come before us and tracked it out a bit.

But could it be skied? I felt for rocks and sticks through my boots, all of which were surprisingly more covered than I had expected, likely from the wet first inch of snow that had now hardened based on the colder temperatures. It might work, I thought several times. It might work.

One son yelled out “first tracks” when we moved into the untracked snow about where we crossed the old road and moved up into the older growth evergreens along the north-facing slope of the canyon. There, the powder deepened and fluffed. I cheered at a full foot of fresh powder at the top near where the springs trickle out of the mountainside all year long.

We laughed nearly the entire hike out, tossing snowballs into the snow-burdened branches overhead to douse each other with powder from heaven. It was a joyous morning.

One thought stayed with me the rest of the morning and interrupted my work. It could be skied, my subconscious had concluded.

At 2:00 yesterday, I couldn’t handle it anymore. I grabbed my back-country skis and finished a meeting while I drove back to the trailhead. The day had stayed cold, and I was delighted that the snow was holding up. I repeated the hike to the top, noting a few spots where dirt and rocks were poking through the snow, imagining skiing to the side of those sections.

At the top, I clicked into my skis and whooped as I slid ten feet down the first slope of the winter. I made a few telemark turns in the meadow, and found myself caught up in grass and small bushes, which convinced me that what looked like a thick cover was still too powdery. I remembered our morning work, the three of us tramping snow the entire way, and I quickly skied back to our morning tracks as the surest way not to snag on a rock or branch on my trip downhill. There, the snow was firm and covered well the hazards of the trail.

The work we had put in that morning was paying off well for me now. I was glad for first tracks. “Early to bed…” and “the early bird…” came to mind, reaffirming that morning work always pays off.

No doubt, with more snow coming, there will be plenty of ski days ahead. Early ones.